Thic Classic Chevy was my first street race car. Originally car was located in Washington US.  It´s NHRA division six area. Car has been built like gasser in 60´s.  I bought car 1988 and then we didn´t realize how big thing nostalgia race cars will be in future.

First thing I did was to change car´s frame like original style with original suspension, steering box....  I want to register car and they looked very much that all in frame, steering, suspension is "original" or original style. Engine was installed very much back.  7. and 8. cylinders were located inside of cabin. 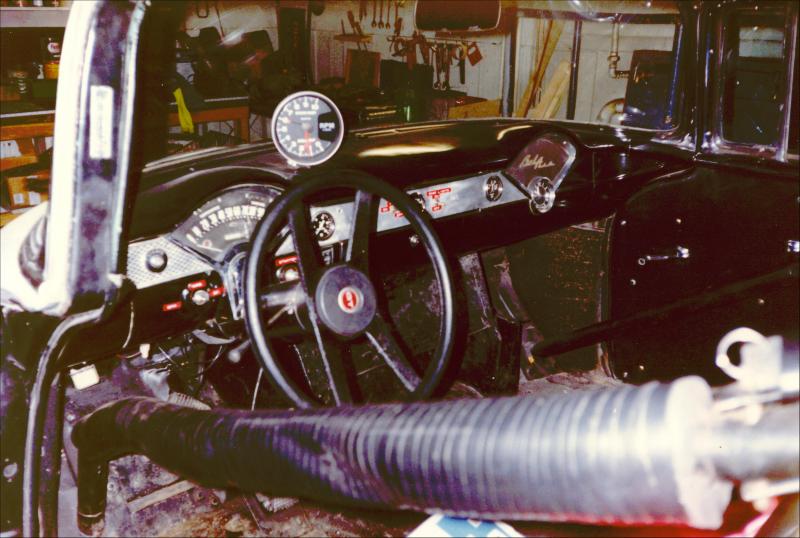 I have cut frame.  next I remove putty and that aluminum "box" in firewall.

Car was falling down to swamp, but still frame, firewall and front part of top were above of swamp. Firewall welded. I transferred big part of firewall from old taxi 55 to this car. Many suspension and steering parts I found from Finland, but most of them from Sweden.  THen we didnt have so much speed shop cataloques. I ordered something from Super Shops. No credit cards, I send them cash money by letter....  Telex and telefax was good help when had conversation to US. Jazz seat and new belts installed. Floor has welded. No english wheel or other equipments. Engine picked up from Sweden. It was hard trip.  I and Juha Mehtala had "good time" and Tuomo was driver.
When we arrived home, we asked driver if we have bought engine or not.... Registered. Scoop was bolted on to carbs, not to flip front. I hadn´t money to buy new wheels front, so I used steel wheels + fullmoons.  Rear wheels I cut, made from 10" wide to 8" wide and turned (outside to inside ><). Mika "malibu bitch" Valle send me next 3-4pics.  Thanks ! After one summer I sold car to South-Finland.  I sold it rolling. Engine bought another man and tranny I sold to North. People were interested in that car, so I got good money rolling car.  Now I had enough money to buy new more lightweight street race car.

Next project is that 1967 Chevy Nova Stw.